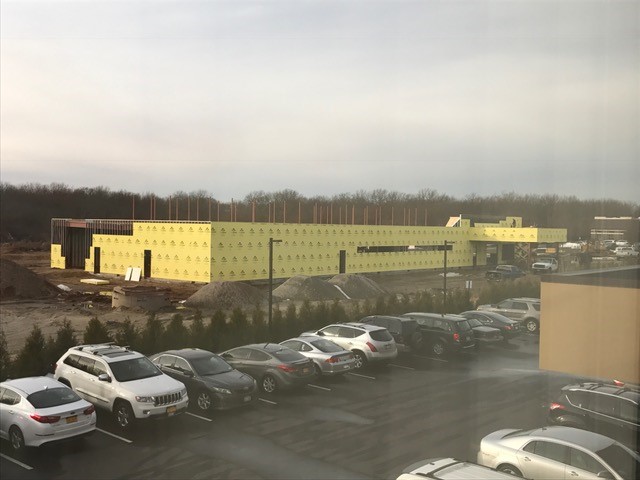 One of the most rewarding aspects of Pinnacle III’s business is partnering with physicians and hospitals who have identified a need in their immediate community to increase their patients’ access to ambulatory care.  We enjoy lending our expertise to de novo ASC development – building on our partners’ initial concept and ensuring their vision becomes a prosperous reality.

Many of our business opportunities arise from word of mouth.   In 2015, prompted by a recommendation from a satisfied physician client, Pinnacle III met with representatives of John T. Mather Memorial Hospital and 19 community physicians to explore the opportunity of developing an ASC in Port Jefferson, New York.  Upon determining Pinnacle III’s business model and values coincided with their needs, we were invited by the group to collaborate with them on this endeavor.  Ground breaking for the new surgery occurred on November 22, 2016.

Here is a transcript of the project’s press release:

With construction officially underway in a secluded lot on Route 112, North Shore residents are one step closer to an efficient and cost-effective surgery center that will provide in-and-out care to its patients while eliminating many of the hassles associated with visits to the hospital.

On Nov. 22, staff from John T. Mather Memorial Hospital and 19 community surgeons stood on the site in hard hats and broke ground on what will be the freestanding Port Jefferson Ambulatory Surgery Center in Port Jefferson Station. The outpatient facility will feature six operating rooms equipped to handle procedures in orthopedics, ophthalmology, pain management, general surgery, neurosurgery and otolaryngology. The project, which cost approximately $12 million and has been in the planning stages for about five years, will be far less expensive to run than a hospital, which means cost savings for patients and the health care system overall. It will also open up more space at Mather for patients that require a more complex procedure and a lengthier hospital stay.

Those involved in the project said they hoped for the facility’s doors to officially open in the summer of 2017. For now, though, they’re just pleased things are finally moving forward.

“As we’ve been saying — at long last,” Kenneth Roberts, chief executive officer of Mather Hospital, said during the groundbreaking. “We’ve been working on this project for a long time now, so we’re very happy to see it finally getting pushed forward.”

During an indoor celebration after the groundbreaking ceremony, Mather’s Director of Orthopedic Surgery Michael Fracchia said he was excited about what the center will mean for the community.

“People love these types of facilities because they can get in-and-out service and it’s truly less intrusive on their lives,” Fracchia said. “If you have something done in a hospital, it’s always an all-day event, no matter what it is. But at the surgery center, you seem to be able to get in and out more efficiently and that saves you personal time, saves money, and saves cancellations. It just makes the overall patient experience so much better.”

Fracchia said the facility will be able to run more efficiently because it won’t need the sort of complex technologies often found in hospitals. A patient might need an intensive care unit or an MRI or CT scan, he said, and while these are wonderful technologies, they’re also expensive and require maintenance. By eliminating these systems, the surgical centers can treat more patients at a quicker pace.

“We want to provide more care,” said Brian McGinley, orthopedic surgeon and president of the project. “We can potentially do more while maintaining our inpatient surgery at Mather. The community will have access here, rather than having to go to Nassau County or into the city.”

McGinley said that while planning the project, the team interviewed many companies that specialize in developing ambulatory service centers around the country. They found a fitting partner in Pinnacle III, a company based in Colorado that has successfully facilitated the opening of comparable facilities nationwide. This will be the first Pinnacle III facility in New York State.

In a press release, Robert Carrera, the CEO/president of Pinnacle III, said the company is excited to partner with and assist the local physicians as well as Mather Hospital in bringing high quality and cost-effective services to the Port Jefferson area.

The doctors all agreed on the project’s mission: to provide cost-effective quality health care to as many people on the North Shore as possible.

“You come in here, you drive in, you get taken care of and you don’t have to go through all the hoops that you would at a hospital,” Port Jefferson-based general surgeon Nicholas Craig said. “The doctors have all been in the community for a long time. We not only work here, we live here, so you get taken care of by people who care about their community … and when you care about your community, you care about the people in your community, and that’s what this is all about.”

The high traffic, fast-paced New York market has yielded a desire for more localized, high quality health care in New York’s diverse communities.  Pinnacle III is exploring other opportunities on the eastern seaboard.  For more information on the de novo development services we provide, visit https://www.pinnacleiii.com/asc-management/de-novo-development/ or contact Trista Sandoval at tsandoval@pinnacleiii.com or 970.492.6059.